To share your memory on the wall of Henry Jackson, sign in using one of the following options:

Print
Our most precious jewel, Henry Thomas Jackson, departed this life on Saturday, November 28, 2020. Born in Withams, Virginia on September 25, 1955, he was the son of the late James Jackson, Sr. and Mildred Taylor-Jackson.

He was united in... Read More
Our most precious jewel, Henry Thomas Jackson, departed this life on Saturday, November 28, 2020. Born in Withams, Virginia on September 25, 1955, he was the son of the late James Jackson, Sr. and Mildred Taylor-Jackson.

He was united in marriage to Tara Sparks. Henry Thomas was educated in the public schools of Accomack County. He later joined the United States Army, where he served for twenty-two years until his retirement.

Henry Thomas was an avid football fan. He also enjoyed spending time with his best friend, Keith. They would reminiscence about the days when they were in the service.

To send flowers to the family or plant a tree in memory of Henry Thomas Jackson, please visit our Heartfelt Sympathies Store.

We encourage you to share your most beloved memories of Henry here, so that the family and other loved ones can always see it. You can upload cherished photographs, or share your favorite stories, and can even comment on those shared by others.

Posted Dec 13, 2020 at 11:51am
I was shocked and saddened to learn of the passing of Henry. He was a great friend. Condolences to the family!!
Comment Share
Share via:
LD 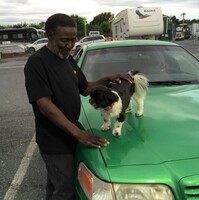