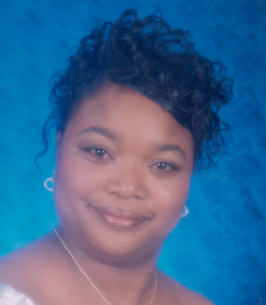 Karen Valeta Poulson was born on September 18, 1968 in Accomack County, Virginia to the late Francis H. Rogers and Ellen F. Bailey. She departed this life on August 7, 2022 at Shore Health and Rehab Center in Parksley, Virginia.

Karen received her education in the public schools of Northampton and Accomack County. She was a 1986 graduate of Nandua High School in Onley, Virginia. Karen entered the workforce upon graduation and held several positions throughout her life. In recent years, she began working for Community Service Board (CSB) in Exmore, Virginia. She held this position until her health began to fail.

On August 16, 2008, she married Kelvin L. Poulson, Sr. This union was blessed with fourteen years of love, until her untimely passing.

At an early age, Karen joined Ebenezer Baptist Church in Wardtown, Virginia under the leadership of Rev. R. W. Wilson. She continued to serve her church under the leadership of Rev. Milton P. Bunting. Karen served as the Vice-President of the Women’s Ministry of the Eastern Shore of Virginia and Maryland Baptist Association. She also served on the Women’s Ministry of the Baptist General Convention (BGC).

In her leisure, Karen enjoyed watching football. The New York Giants were her favorite team. She didn’t play about her team, if you wanted to make her mad then talk about her team.

In addition to her parents, Karen was preceded in death by her sister, Patricia Rogers; nephew, Alvin L. Rogers, Jr.; one uncle; and grandparents.