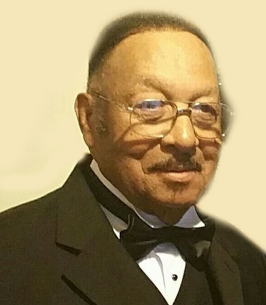 For I am persuaded, that neither death, nor life, nor angels, nor principalities, nor powers, nor things to come, nor height, nor any other creature shall be able to separate us from the love of God, which is in Christ Jesus our Lord.
Romans 8:38-39

Leon Smith, the beloved son of the late Mildred Smith Lofland and John Leon Collins, was born May 30, 1931 in Painter, Virginia.

Lee, as he was affectionately known, received his education in Accomack County Public Schools. Before graduating, he was drafted in the United States Marine Corps. This experience afforded him the opportunity to travel to many countries. While being a Marine, Lee’s skills were quickly recognized as he rose to the ranks of Staff Sergeant and the leader of his platoon. After serving eight years, he was honorably discharged on June 24, 1952.

Leon returned home and found his “soul mate,” his “good thing,” his partner for life. On August 13, 1958, he was joined in Holy matrimony to Maggie Helen Turner. Leon was the epitome of what God called husbands to be. He was a provider, a protector, and most of all he loved his wife.

Leon felt the need for a “higher power” in his life and was converted, baptized, and joined Holy Trinity Baptist Church under the pastorate of Rev. W. W. Gilchrist. Leon became a very active and dedicated member. He served on the choir, the Trustee Board (ministry), and was a Junior Deacon. On April 15, 1973, Leon was ordained as a Deacon. Deacon Smith’s name became known through the Shore for his “anointed prayers.” He took his role seriously by serving faithfully in his church and community. For years, he would cut the church’s grass and fix anything that was broken without receiving a dime. His grass cutting business spread to the community, where he would cut your grass even if you didn’t have the funds to pay. On February 2014, Deacon Smith joined the discipleship of the Shiloh Baptist Church where he served until his demise.

Leon’s character spoke volumes. He was quiet, but definitely an observer. He would often say, “Look at people’s eyes, that will tell you a lot about a person.” He was a father figure to many family members, young men and women he encountered.

Although he was a jack of all trades, Leon’s main career was at the Copes Ice Corporation, where he worked for forty-five years. The “Ice Man,” as he was called, helped a lot of young men in Accomack County obtain their first job. The color of their skin didn’t matter as long as they would do their job. He would jokingly say, “Hire in the morning and sometimes had to fire them in the evening.” He tried to instill in them what it meant to be a man and what it meant to take care of your family.

On Saturday, June 4, 2022 at approximately 5:00 pm, God said Leon your work on earth is complete. After two and a half months of going to the hospital, going to Shore Health and Rehab, then back to the hospital. You have finished your course. Now it’s time for you to rest from your labor. Leon looked up to heaven, took a long breath, and closed his eyes and gave up the ghost. He was at peace now with his Savior. We shall greatly miss him, but we bow in humble submission to an all-wise God.