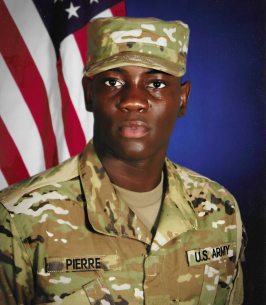 A Beautiful Soul…
SERGEANT ALEX JUNIOR PIERRE was born in Fort Myers, Florida on May 30, 1997. He was the son of Jean Murat Pierre and the late Anacia Dieujuste, both Haitian emigrants. Alex was extremely proud of his Haitian roots. He visited Haiti as a child, loved Haitian music, and enjoyed cooking Haitian food.

Alex was educated in a variety of public schools, moving to Accomack County, Virginia in 2012. He attended Nandua High School with support from his community, including his foster mother, Thelma “NaNa” Gillespie. Baptized in the Christian faith as a child, Alex attended the fellowship known today as Foundation of Faith Ministries.

A Beautiful Dream…
Those who knew Alex in high school knew him as an old soul. Even as a child, he dreamt of falling in love, having a family, and building a career. Influenced by his favorite sitcoms, Good Times taught Alex how a husband and father of humble means could work to provide. In The Jeffersons, Alex saw a family who was “Movin’ On Up.” The Cosby Show was the pinnacle, representing the marriage of two accomplished professionals who laughed, loved, and created enjoyable memories.

A Beautiful Love Story…
Alex thrived at Nandua. He played football and ran track, but was best known for being voted class clown. His sense of humor was infectious. Though he considered leaving high school to work full time, he turned his focus to graduating. He opted instead for a part time job at the local Walmart, a decision that would set the course for his childhood dreams to become a reality. There he met Shannon Sturgis.

After Alex graduated from high school, he enlisted in the U.S. Army and completed basic training at Fort Sill, Oklahoma. On December 19, 2016 when Shannon picked Alex up from the airport, he insisted they drive directly to the Virginia Beach General District Court. They obtained a marriage license, Alex proposed, and they were married that afternoon. Alex, Shannon, and her son Kyleo became a family of three. This was special to Shannon, as the two shared a May 30 birthday.

In January 2017, Alex began his career as a 35F, Intelligence Analyst. He left for Fort Huachuca, Arizona to complete thirteen weeks of Advanced Individual Training (AIT). Alex hoped to make it back to Virginia before his next major milestone, but on March 16, 2017, he returned from three-day mission, turned on his phone, and learned Shannon had given birth to a baby boy, his son DaReese.

A Beautiful Family…
Now a family of four, Alex’s childhood dreams were becoming even more of a reality. The Pierre’s moved to Fort Riley, Kansas for Alex’s first military assignment. There he earned an Associate’s Degree from Barton County Community College. In December 2020, they received orders to go to Fort Eustis, Virginia. He enrolled in college, and worked to earn a 3.7 GPA. At the time of his passing, Alex was four classes shy of completing his studies. American Military University has posthumously awarded him an Honorary Bachelor’s Degree in Criminal Justice.

At home, the family enjoyed weekend adventures to the zoo, to the aquarium, to local parks, anywhere Alex scouted. As the family chef, Alex was known for his signature Haitian ox tails, griot, legume, and sos-pwa. Home life fueled Alex’s passion to make the world a better place, to make people feel better. Shannon would often say this: “We rejuvenated him. He rejuvenated the world. He was our Superman.”

On May 20, 2022, a job offer took the family to the community of Seven Oaks in Odenton Maryland. Alex commuted to Fort Eustis during the week, and spent the weekends with the family, turning their new house into a home. He did not mind the distance, because in Alex’s eyes, the home in the suburbs was his way of “Movin’ On Up.”

He rewarded himself with a dream purchase, his new toy, a Suzuki GSXR 600 motorcycle. His future plan was to transition into a career with the Department of Defense, the culmination of his childhood dreams.

A Beautiful Legacy…
Alex departed this life on July 8, 2022 at 6:30 pm. Left to carry on his dreams of vacations, outings, holidays, movie nights, game nights, and life settling into Seven Oaks are his wife of almost six years, Shannon Pierre and his sons, Kyleo Pettit and DaReese Pierre.