To share your memory on the wall of Calvin Strand, sign in using one of the following options:

Calvin was educated in the Accomack County Public School system and was a 1965 graduate of Mary N. Smith High School.

Calvin liked watching sports and motorsports. He was a fan of the Dallas Cowboys and the Los Angeles Lakers. He also loved to ride his motorcycle until his health failed.

On June 26, 1976, he married the love of his life, Jo Ann Bailey and they shared forty-two years of marriage until her passing in 2018.

In addition to his parents and his wife, he was preceded in death by Margaret B. Godwin, James E. Strand, Herman L. Strand, Jr., and Robert L. Godwin.

To send flowers to the family or plant a tree in memory of Calvin Thomas "Bobby/Buck" Strand, please visit our Heartfelt Sympathies Store.

We encourage you to share your most beloved memories of Calvin here, so that the family and other loved ones can always see it. You can upload cherished photographs, or share your favorite stories, and can even comment on those shared by others.

Posted Apr 10, 2021 at 10:10am
It is with love and sympathy that we share with you in this time of loss. May God continue to Bless you with refuge and strength.

Posted Apr 07, 2021 at 03:57pm
Summer memories are kept in my heart of family vacations to Accomac, Virginia when we visited with Uncle Herman, Aunt Margaret and all the family there. Remembering Cousin Bobby, just like his brothers, to have always been a gentleman and so very kind. We lift up all the family in prayer during this time and considering the days ahead; that you would be comforted and strengthened by God's Holy Spirit. 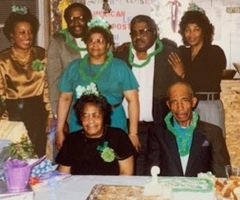